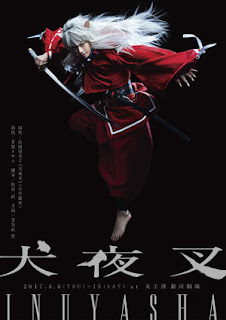 Hi, guys! Since I'll be talking about something you won't see in Poland (oh, I dread what the translators'd do to names and dialogues...) I'll write in English. I kinda hope my Polish readers can forgive me for switching to English and making them translate the whole text. I'm planning on posting reviews in English only when I'll be talking about something not published in Poland.


Okay, so readers of my blogs (and my fics) know already I'm a huge fan of InuYasha. So it's no wonder a news about a stage play caught my attention, right? It's not the first one, there were other adaptations of this manga (and anime) before. I was so excited and couldn't wait to see the stage play.

The plot follows more or less accurately the plot of the first season of the anime (kill me, I don't remember how many volumes of manga it would be, I kinda read the whole thing only once) so I will focus on other stuff. There was this girl Kagome Higurashi, who was pulled in a magical well, transported 500 years in the past where she met a half youkai Inuyasha and broke the Sacred Jewel which could enhance powers of a youkai amd grant wishes. So they went on a quest to collect the shards and - you guessed it - save the world - this is probaly one of the worst summaries of the series ever.

Now, about the stage play. The major change was that Kaede's role was much bigger here, she was not only an advisor and healer, but also a travelling companion of Inuyasha and Kagome. She kinda took Shippou's place and I am sad for the kitsune that he wasn't included in the stage play plot. I must say that Kaede was a good choice for a member of inugang - after all a wise priestess could be a great help for our favourite schoolgirl and hanyou - but still, the little fox was a good companion and helpful sometimes. It was also sad that Sango didn't appear here. Maybe she would appear in a second stage play, if there would be one.

For me the funniest part was the introduction of Miroku, the lecherous monk and the bicycle scene before it. Sadly, I got all my Naraku-in-his-monkey-pelt scenes spoiled by my friend who sent me a screen of him with "he looks cozy" note on it (mwahaha. now I spoiled it to you too!) so whenever he appeared I was giggling like crazy . And Kagome's reaction to Inuyasha's ears was pretty funny to watch as well.

Costumes were quite okay, but I must say I disliked the pink thing Kikyou was wearing over her miko robes. And Inuyasha's clothes could be better. I guess they had to make some changes for them to look better on stage, but still... Also the fact that the actor was wearing shoes was a little against the canon. But Tessaiga looked pretty cool. Naraku's monkey pelt and Sesshomaru's mokomoko-sama could be fluffier, it looked kinda like a cheap cosplay. And I want to know why Kikyou had a fan and was performing kabuki-ish thing with it? What's the meaning of this scene, hm? If any of you get it, please, enlighten me in a comment below.

Besides I must say I'd feel much better without this whole "background animation stuff", they could do it much better just by decorations and the "stage ninja", since they were using them in other scenes (I love you, stage helpers who sneak behind actors and do stuff!). Fighting scenes were nice to watch. I felt sorry for the actor playing Inuyasha becase he had to run around a lot and do acrobatic stuff quite often.  Music was okay, but I really missed themes from anime.

I'm really happy I had a chance to see the stage play and hope there will be a continuation. I think all InuYasha fans should definetely see it.